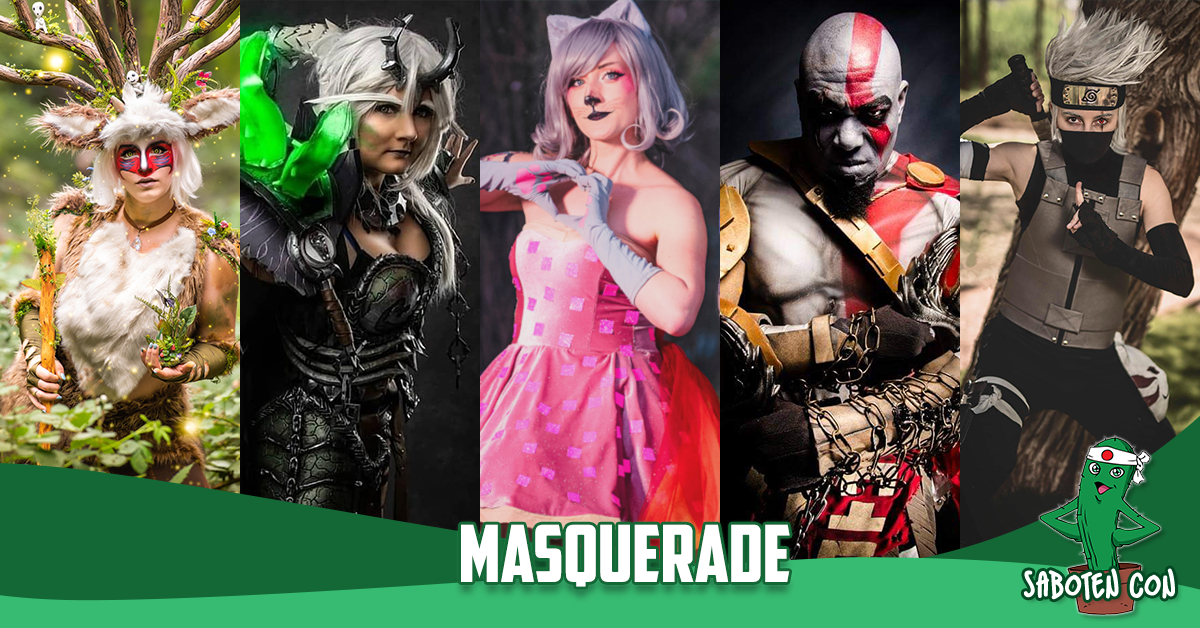 Meet Our Masquerade Judges and MC!

Michael “Knightmage” Wilson was born and raised in Cleveland, Ohio and now resides in Youngstown, Ohio.

A current decorated 22 year Deputy Sheriff for the Mahoning County Sheriff’s Office in Ohio, Michael has been cosplaying since 2012. Having created over 300 costumes, Michael is an award winning cosplayer with many of his creations being praised and displayed on numerous platforms in print and online. Michael is noted as one of the most influential and diverse male cosplayers in the world. Along with judging cosplay contests Michael often hosts cosplay panels and workshops at conventions showcasing the creative, positive, inspiring and supportive side of cosplay.

Having a love for acting and stunt work, Michael has worked on several Hollywood comic book movie productions. Michael was also an alternate for the 2006 reality show “Who Wants To Be A Superhero” hosted by Stan Lee. Michael has worked on and has been featured in several fan films and productions such as the popular YouTube series “MAN AT ARMS: Reforged”. Michael is also a spokesperson for FX latex product, Zombie-Skin. Michael has also created various costumes for World Wrestling Entertainment superstars.

Genuinely loving to entertain, make a positive impact and bring smiles, Michael most often uses his costuming by bringing awareness and participating in many charitable events, benefits, parades, birthdays and hospital visits to children. This has led him to becoming a member of esteemed costuming groups all over the United States such as “The League of Heroes, The Heroes Alliance-Ohio Branch, East Coast Avengers, Costumers with a Cause and Superheroes to Kids in Ohio and Heroic Inner Kids”. Michael often works closely with charity organizations as a sponsor and has partnered with over 150 various organizations around the world to fundraise and bring awareness to these organizations. Michael has received numerous awards for his charitable deeds including the “’Outstanding Service Award” from Credit Where Credit Is Due, the CosBravo Award and most notably the “Presidential Volunteers Award” from President Barack Obama and the White House.

Bebe Alkaid Cosplay is international and award winning cosplayer from Northern Michigan who has been cosplaying for over 7 years now. Bebe loves to do big foam armor sets and original designs (of her own and of other artists) of characters near and dear to her heart.

She has built large armor sets such as Miranda and Meru from Legend of Dragoon, Ysera from World of Warcraft, several Final Fantasy characters and many more. Highly detailed armor sets are right up her alley. She uses various tools like dremels, hot tools, and also sculpts her own pieces. Bebe also loves using different special effects pieces in her cosplays. Lights, smoke, and larger than life wigs take her builds to the next level and she loves taking on the challenge and learning new cosplay techniques.

Outside of cosplay Bebe is a stay at home mom and military wife. She is always ready to talk about the struggles of time management and ways to make cosplay easier and cheaper!

Bebe has been featured on magazine covers and center spreads, Nerdist, Yahoo, has guested with various online and in person conventions and was also awarded Indie Gamers cosplay creator of 2021. Her favorite thing to talk about during a convention is that there is no wrong way to cosplay. She loves to spread positivity and acceptance within the cosplay community.

Ryann Kay is an AZ local costume designer, circus performer and cosplayer. She started sewing at age 11 and cosplaying at the age of 21. And while her daily life is full of Circus and Acrobatics she loves to find new ways to combine her passions of costuming and performing together in the Cosplay Community.

Illuminaughty Cosplay- Paige of Illuminaughty Cosplay is an award-winning cosplayer, twitch streamer, and artist based out of Phoenix, Arizona. After attending her first convention, Saboten Con 2015, she taught herself how to sew and never looked back.

Paige has competed in cosplay competitions herself, starting back in 2017, and stepped into the judge role in 2022.

Paige loves to craft costumes from video games such as League of Legends, Pokemon, Super Mario Galaxy, and even whipped up original designs based on internet pop culture, like Nyan Cat! She is best known for her Star Guardian Jinx from League of Legends, Evelynn and Akali of KDA, and Alice Liddell from Alice Madness Returns.

Paige has come a long way since her humble beginnings using poster board, popsicle sticks, and whatever fabric was on clearance but still finds ways to incorporate unconventional materials into costumes. She uses her tablet, hot glue gun, and sewing machine to pull costume ideas right out of her imagination and onto the con floor. She was featured as a local creative in Voyage Phoenix Magazine and loves to encourage everyone to cosplay. She sees cosplay as an art form, a physical manifestation of our love for a character, and an outward expression of our nerdiness. The way you interpret a character is up to you!

When she isn't hunched over her sewing machine, Paige is streaming on twitch as Illuminaughty or designing stickers! If you want to talk about League of Legends, Evangelion lore, or anything Nintendo, Illuminaughty Cosplay is your gal!

AmberSkies is no stranger to the world of creation and overall nerd-dom! She has been involved in the creative arts and enthralled in the world of anime since she was just 8 years old when Pokemon and Sailor Moon came blasting into her life. In the years since, she has harnessed the power of the fandoms she loves-- and has built up her nerdy empire and transcended to the professional cosplay stage!

Amber has taken on increasingly elaborate and complex costuming builds, proudly working hand in hand with amazing companies via material sponsorships with Plaid Crafts, and costuming work with the one and only Marvel Studios, Fox Entertainment, and the Walt Disney Company.

She uses her self taught arsenal of creative skills to transform herself oftentimes from scraps and recycled goods into fantastic heroes and beasts across all fandoms-- specializing in detailed prosthetic/makeup work, elaborate paint jobs, and Armor/Prop Building.

She has professionally competed with her cosplays and won First Place or Best in Show at Disney's D23 Expo, San Diego Comicon International, Phoenix Fan Fusion, Long Beach Comic Expo, and more. She now spends her con days mostly as a veteran cosplay craftsmanship judge, utilizing her teaching skills as a crafting panelist, and being MC for various creative endeavors at Fan Expos and Conventions. She also loves working her Artist Alley Booth as a vendor (AmberSkies Creations) showcasing her many gorgeous fan art prints and unique merch.

Amber continues to grow her online presence through taking to the streaming platform Twitch, and pursuing the route of gaming and live entertainment via bodypainting, FX makeup, and loads of fun with her online community at AmberSkiesTV. She loves crushing hugs, lives for building others up, and spreading cosplay positivity for all-- leaving a sprinkle of sunshine wherever she wanders!"

Our Halftime Show will be preformed by Kazha!

The Masquerade will be Sunday in the Main Events at 8pm. https://sabotencon.conmagick.com/programming/panel/view/cmjag3ql4yfgrk9