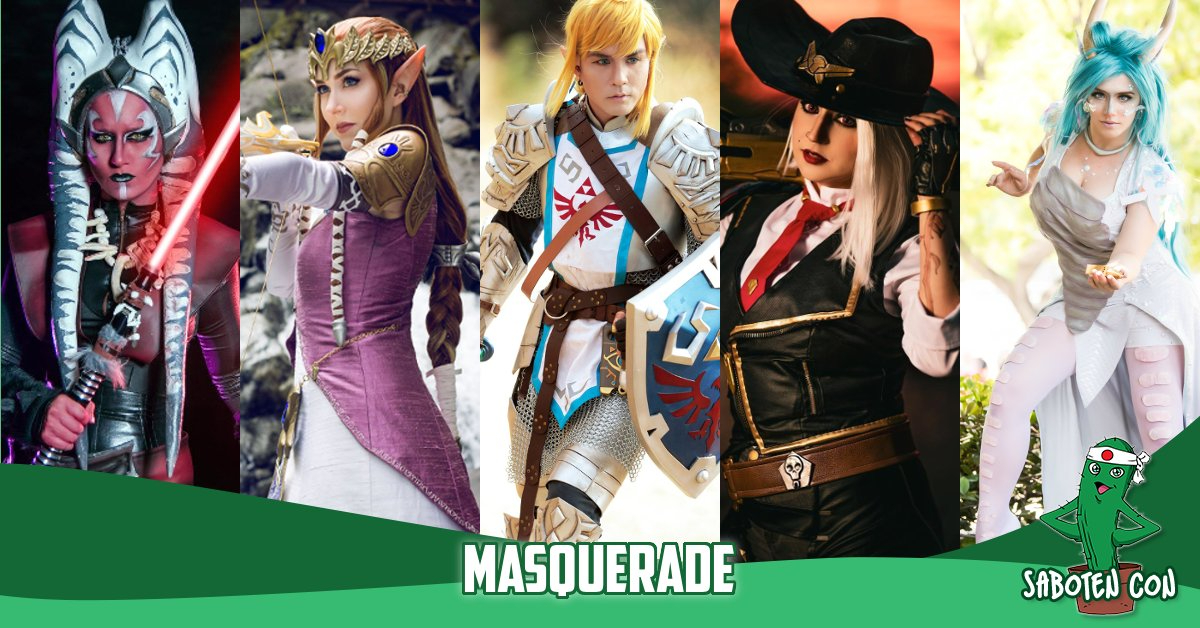 Saboten Con's Masquerade is the largest event of the weekend! https://sabotencon.conmagick.com/programming/panel/view/1t8d2w4kqlcksd9

Atelier Heidi is an award-winning artist and designer based in Seattle, Washington. Best known for her portrayal of Twilight Princess Zelda, Heidi has a fondness for elves and other pointy-eared characters. She specializes in leatherwork and sewing, but her portfolio includes a broad range of textile work, sculpting, and photography.

Heidi cosplayed professionally for Nintendo at San Diego Comic Con 2017, representing their Inkling Girl character for the launch of the game Splatoon 2. Her work has been featured by IGN, Kotaku, and in Target's "Bring Your Rey Game" ad campaign. She has appeared internationally as a cosplay guest across the United States, Canada, and the UK. She studied as an intern at GSTQ Fashions in 2014 and earned her BFA in Theatrical Technology and Design from the University of Texas at Arlington in 2015.

Over the past few years, Heidi has turned her love of sewing and design into an original fashion brand, Forest Girl Clothing, which specializes in cottagecore and mori kei styles. You can visit the shop at www.ForestGirlClothing.com or view her entire artistic portfolio at AtelierHeidi.com

Courtney Leigh was born on the tiny island of Saipan, grew up on an ostrich farm, schooled in dramatic arts and has a degree in fashion design. In 2010, she started her costuming business and has made over 2,000 costumes so far for people all over the world and has worked in theatre, haunted houses and film doing makeup, acting, and wardrobe. She loves science fiction and horror the most, but any good story or project will keep her interest and she's always looking for a new project to undertake.

AshenQueen is a local cosplayer who has been cosplaying since 2009. She went to school for costume design, and earned her certification for it. She is a big believer in cosplaying what you love and inspires you, which usually reflects in her current projects! Bringing her favorite character to life is her drive to keep learning and growing. You'll often catch her reading comics, gaming, and oh ya making cosplays!

AmberSkies is no stranger to the world of creation and overall nerd-dom! She has been involved in the creative arts and enthralled in the world of anime since she was just 8 years old when Pokemon and Sailor Moon came blasting into her life. In the years since, she has harnessed the power of the fandoms she loves-- and has built up her nerdy empire and transcended to the professional cosplay stage!

Amber has taken on increasingly elaborate and complex costuming builds, proudly working hand in hand with amazing companies via material sponsorships with Plaid Crafts, and costuming work with the one and only Marvel Studios, Fox Entertainment, and the Walt Disney Company.

She uses her self taught arsenal of creative skills to transform herself oftentimes from scraps and recycled goods into fantastic heroes and beasts across all fandoms-- specializing in detailed prosthetic/makeup work, elaborate paint jobs, and Armor/Prop Building.

She has professionally competed with her cosplays and won First Place or Best in Show at Disney's D23 Expo, San Diego Comicon International, Phoenix Fan Fusion, Long Beach Comic Expo, and more. She now spends her con days mostly as a veteran cosplay craftsmanship judge, utilizing her teaching skills as a crafting panelist, and being MC for various creative endeavors at Fan Expos and Conventions. She also loves working her Artist Alley Booth as a vendor (AmberSkies Creations) showcasing her many gorgeous fan art prints and unique merch.

Amber continues to grow her online presence through taking to the streaming platform Twitch, and pursuing the route of gaming and live entertainment via bodypainting, FX makeup, and loads of fun with her online community at AmberSkiesTV. She loves crushing hugs, lives for building others up, and spreading cosplay positivity for all-- leaving a sprinkle of sunshine wherever she wanders!"

Masquerade Registration is open until Friday, August 27th at Midnight. If you would like to part of Saboten Con's 2021 Masquerade, please register here: https://sabotencon.conmagick.com/programming/panel/view/1t8d2w4kqlcksd9